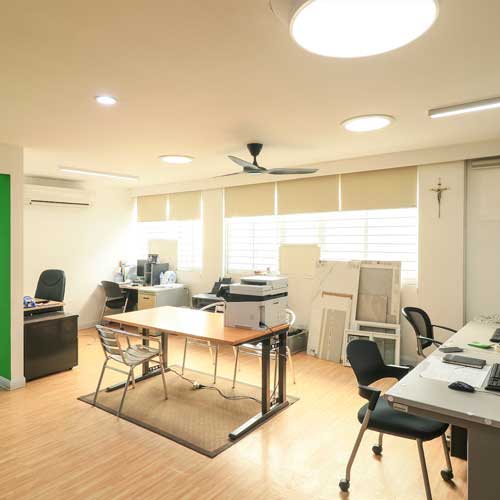 HIS LIFE IS COLORED GREEN

When 30- something Robert Crespo and his wife Liza decided to return to the Philippines after living in New York, they still wanted to work in the construction industry. In New York, Robert handled sales of construction materials while Liza worked as an architect. This was when they first encountered a trend towards sustainable design and green products. "My wife and I said that we wanted to do something meaningful in the areas of our expertise and in the process leave a lasting legacy to our two children," says Robert, a BS BA graduate of De La Salle University.

Months before their return to Manila, the couple attended expos and trade exhibits and personally sought suppliers and manufacturers of green products. One of the first that they talked to was Solatube, a company that makes tubular daylighting devices. Through its dome shaped transparent cover, the Solatube allows sunlight to come into a home or office, thus illuminating the place and minimizing the need to turn on lights during the daytime. Solatube was also approached by other parties that wanted to bring this product to the Philippines but the exclusive distributorship was eventually awarded to the Crespos. "I think they saw that we really knew about their product and that we had the passion to promote green living in our country," says Robert.

In 2005, Robert and Liza established their company, Philippine Geogreen. Aside from securing distributorship for the tubular daylighting device, they also got the permission to market Big Ass Fans - a high volume, low speed fan; and Topps, a water-proofing and insulating paint for roofs. "We realized that if we were to go into this in a major way, we need to carry more than one type of green product," says Robert. "There are many products out there that both the big companies and individual homeowners can use." As such, Robert and Liza are also continually seeking other products to add to their line.

In the beginning, Philippine Geogreen was a two person team composed of Robert and Liza. "Liza and I presented to companies, and I did the installations," says Robert. Today, their venture has expanded into a one-floor office with a moderately-sized staff. The company also has its own warehouse in Quezon City. And although they now have their own.team of installers, Robert still supervises and even does the installations himself. "The products are actually easy to use. In the States, they fall under the DIY (do-it-yourself) category. The fact that I can install them myself demonstrates that."

Robert is happy to report that their client base has grown to include multinational companies, factories, high-rise buildings and malls. They are also gaining orders for their water-proofing and insulating roof paints. These paints, says Robert, are remarkable that "you can walk barefoot on your painted roof at high noon without getting your feet burned."

He admits the products are a bit pricier than those found in hardware stores and home depots, but the savings in terms of electricity cost and maintenance are worth the investment. "The daylight tubular device (which costs around P8, 000 each), for instance, has a 10-year warranty while a regular skylight needs to be replaced every three to five years. The device can also extend the life of your light bulb, so there are also a lot of intangible savings," he cites.

Robert adds that a low volume, high speed fan that is eight feet in diameter has the same cooling effect as 15 to 20 desk fans. "But it only uses the same amount of electricity a single fan uses," he emphasizes.

He adds that there are other budget friendly ways to go green."I advocate the use of a ceiling fan with an air conditioner to distribute cool air in a room. If you have a ceiling fan, you can downsize the horsepower of your aircon. This spells 20 to 30 percent savings in your cooling bill," he says.

"In the end, going green is really a lifestyle, a mindset," says Robert. "We want everyone to get in on this. We can educate people that there are products out there that are friendly to the environment."

Robert Crespo has an earth friendly product for your home. It could be a Big Ass ceiling fan, which can cool your house more efficiently or solar lights. The light enters the house in tubes installed through the roof and the ceiling.